When Jim and Carol Cymbala went to Brooklyn Tabernacle in the early 1970’s, according to Jim Cymbala, “More people were turning to Crack than to Christ.” He described the dismal early days in his book, Fresh Wind Fresh Fire. They had no training for ministry, no money, and only a handful of members.

Before long, seeing few victories and feeling personally defeated, the discouraged Pastor decided he needed to quit. It was during that dark period he received a distinct and unexpected call from God to lead the people to pray. The next time he was before the church, he told them about his strange call from the Lord to focus on prayer.

The following Tuesday night, about a dozen members joined the pastor for prayer. They joined hands, stood in a circle, and prayed. Five minutes later, they were finished. They obviously weren’t sure yet how to conduct a prayer meeting but they had taken the first steps. Over the next few years, Brooklyn Tabernacle would become known around the country and around the world as a praying church.

Today, about 10,000 people every Sunday wait in line to attend Brooklyn Tabernacle. The attendance is a miracle but it doesn’t end there.

Carol Cymbala has led the Choir since soon after arriving at Brooklyn Tabernacle. Her original choir consisted of nine people. In spite of not reading music, Pastor Cymbala’s wife Carol has received 5 Dove Awards, 6 Grammy Awards and has written hundreds of songs for the now 270 voice Choir and for their 28 albums.

How has all of this occurred? Jim Cymbala traces it all to that call from the Lord so long ago to build a praying church, and to make the weekly prayer meeting the most important service of the week. He calls the prayer meeting  “the barometer of the church.”

It didn’t start big but it grew. The first Tuesday night prayer meeting of a few members gathered in a circle, is now 3000 people a week crowding into the church to call upon the Lord. The prayer meeting officially begins at 7pm but people start pouring in at 5pm to pray for the prayer meeting! 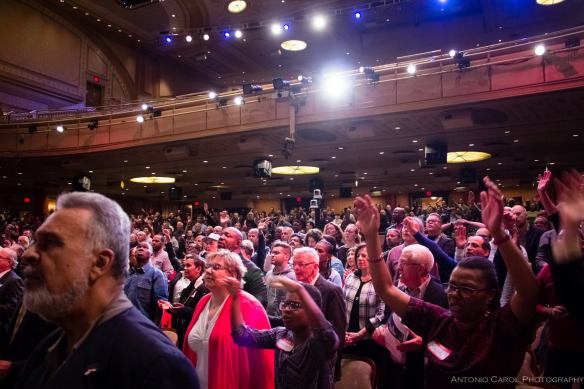 In my life, the most spiritual experiences I’ve ever had in church have been at Brooklyn Tabernacle- both at the Sunday Church services and at the Tuesday night prayer meetings. The book, Fresh Wind Fresh Fire, written the same year I came to Hyde Park Baptist Church as Senior Pastor, is the most influential book I’ve ever read.

Not everyone has had the privilege yet of attending the Tuesday night prayer meeting in Brooklyn, so we are bringing it to Austin. On Thursday, September 14, Jim Cymbala is coming to lead a City Wide Prayer Meeting at Hyde Park Baptist Church. This gift to the city is a ministry of the Unceasing Prayer Movement of Austin. Everyone is invited to attend. Doors open at 6:00pm for prayer before the service begins at 7:00pm.

God is moving in Austin, and around the country through a prayer movement. Brooklyn Tabernacle is nothing short of a miracle but God can do anywhere what He has done there. We are praying now that the prayer movement in Austin will be energized and pastors and churches will encouraged to pray as never before. God still hears and answers prayer!

4 thoughts on “BROOKLYN TABERNACLE: THE CHURCH THAT PRAYER BUILT”